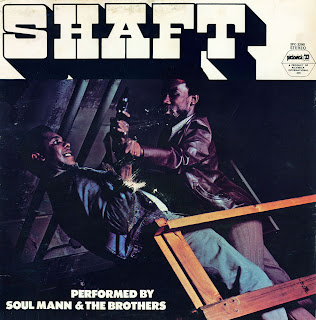 As a youngster with an insatiable appetite for music and usually less than $5 in his pocket - Woolworths, local drugstores and a store called Masters (now Modells) were indispensable and invaluable destinations. I beefed up my classical collection with Masters' sizable selection of Nonesuch cutouts. On rare occasions they'd have a big washing machine box filled with 45's for 10 cents each.

If I had to guess I'd say this one came from Nichol's Drugstore in Selden (now a hero joint). I'm not sure who dropped the $2.99 - my brother, me or my mom. Either way it became 'mine'. (This is not my original copy, tho' - see this post for explanation.)

Pickwick records made their living putting out knock-offs like "Shaft", and by picking up unwanted budget releases/artists from other labels. The silver label usually meant you were in for iffy performances, a low count on actual audio time, poor vinyl quality, an off center pressing etc.; this album being a major exception in the performance department. I had a collection peppered with Pickwick releases. Here's the pickwick wiki (fun to say!) and here's another site about them - although it's been "under construction" for months (or maybe years); there are links to Pickwick subsidiaries which are very interesting reads if you're into such things. 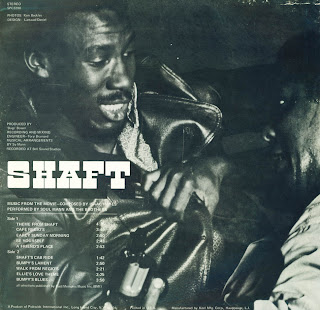 After comparing track by track Mr. Hayes' version with Soul Mann and the Brothers - I'm of the opinion that the Pickwick release is rawer (in part due to a slightly pared down instrumentation), looser and funkier.  There is no banter in the title track. Soul Mann is actually Sy Mann*, and "the brothers" were mostly a bunch of white dudes, including Will Lee on bass. The musicianship is outstanding; track lengths and tempos vary from the Bar-Kays performances, always for the better.

I won't often be posting audio files from other artists - but since this is so tasty (and out of print) here's Bumpy's Blues with a sly flugelhorn solo by one of my favs Lew Soloff. Just so nice! - KM


* - the last sentence on the spaceagepop page about only 2 tracks being from Isaac Hayes' soundtrack is untrue - all of the tracks are from the movie. I've notified the editor.
Posted by KM at 6:58 PM