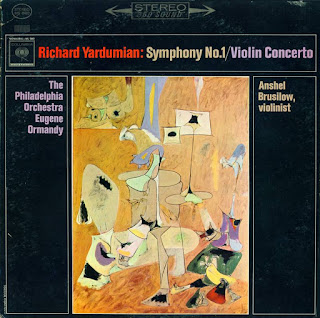 This is a survivor from my 2nd record collection - one of the 20 or so I grabbed to take with me when I moved to Brooklyn from Selden. Most of the others had water/mildew damage (half of the ones I salvaged had to come sans jackets). This was perhaps the only one I chose not for sentimental or musical reasons, but for it's possible value: on the back is an autograph by the composer.
I picked this up before I was 20, and did not have an ear for modern composition. I was also presumptuous and narrow-minded, and thought this must have belonged to the composer himself (or his most devoted fan)... since there was all this extra typewritten material inside with press reviews of the album. I was not the pointiest sharpie in the pencil cup back then. All I needed to do was read the autograph. 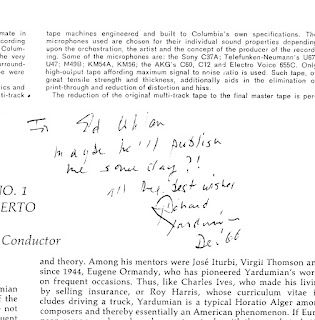 "To Ed Uhlan - maybe he'll publish me some day?! All my best wishes, Richard Yardumian Dec '66"
While perusing through my modest vinyl collection the other day - I thought I'd give Mr. Yardumian another go, since my tastes and understanding have come a ways in the last 10 years. When I absorbed the autograph, and considered the 11 pages of press and analysis, I became a little alarmed. Had I intercepted this attempt by the composer to get his music to the masses? No - the date clears me of that crime. Also, if Yardumian had any knowledge of what type of publisher Uhlan was, then he might have saved  the press material for a better occasion.

Just who was Ed Uhlan? I had to find out! A quick google revealed him to be owner of Exposition Press, one of the 4 largest vanity publishers in the world. (In case you didn't know - vanity publishers print your book at your expense, and in most cases - that's about it. It seems that Uhlan went the extra mile and promoted it, and also printed it up to industry standards, and put effort into the design and craft). For a classical composer with 13 children, this was no contact at all - but more of a stinging letdown.

Nonetheless - the autograph (I still have no concept of it's value - although the album itself is going for a saucy $60 on ebay) introduced me to a couple of intriguing characters in the arts...and in Uhlan's case - a fascinating life story.

He grew up in Hell's Kitchen, the son of Ukrainian immigrants, becoming a bookbinder. His boss and job went under during the Great Depression. An industrious youth, Uhlan took the knowledge he picked up at the publisher's and went to the NYC Public Library. He found 600 poets who had recently been published and got their addresses. He then contacted them asking if they wanted to be a part of an anthology he was publishing. Inclusion meant they had to purchase a copy at $3. For $5.50 they could get 2 copies and their name on the cover in gold. This brilliance and intrepidity paid off - the poets were very happy with the book, and 6 years later Uhlan had 6 companies running. Pretty cool.

Yardumian, a much mellower man of Armenian descent, was fairly popular for a time, and received much support from Eugene Ormandy. He seems to have slipped into relative obscurity, his music being somewhere between Schoenberg, Bloch and Stravinsky - and at times, very unique. Luckily - I have some fine press material to help us out!

"Yardumian uses a 12-tone idiom that he has created for himself. The system permeates all aspects of his music, so that the result is personal, stylistically unified and formally sturdy. Although there are dissonances in the writing, there is a modal base that gives it a sense of tonality and keeps it free from extreme contemporaneity." - New York Times

That is a very astute summation of his sound. I kind of like it, but I can see where others more entrenched in classical aesthetics would not like it's rhapsodic, neo-romantic aspects. Snobs. lol  His music is more often than not God-centered, not always a popular stance in the 20th century highbrow circles. Yardumian later became involved with and composed for a branch of Christianity which adds (and insists upon) a 3rd testament. I doubt this helped him make headway in popularity (even with me). Still, the critics were raving about this particular album. The Music Journal goes as far to say he "may be the new Bach". Wow. Well, that didn't happen (yet, anyway) but it sure looks nice in your press kit!

There are 2 albums available for download at Amazon, most of his vinyl will fetch a fairly steep sum. Here is an excerpt from my copy of the 1st Symphony. According to Yardumian, the work is inspired by Noah and the Flood, and describes "travails experienced by everyone at some time or other" and that the story of the flood is "something in which we are all involved".

As far as the larger-than-life Ed Uhlan goes, there's plenty on the internet about him. Here is an extremely fascinating interview . He's quite a character and it's very fun reading. - KM
Posted by KM at 10:02 AM