Puttin' out records runs in the family... 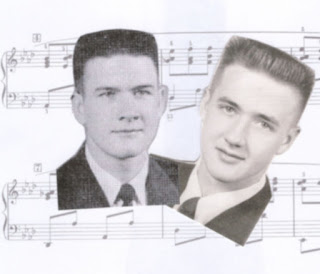 As far back as the Old Testament, we learn of families or tribes that excelled in one area or another. This tribe were master craftsmen, this tribe fierce warriors, and even this tribe skilled in music. In Western Africa - you are either born a Griot or you do something else (even so, musicians are still of a 'lower' caste). Occasionally, genetics can be a wonderful thing. As evidenced by the above photo, I have the blessed inheritance of handsome looks (and humility?). Music also, seems to be deep in the heart of nearly all my parents, grandparents, aunts and uncles.
The two uncles above, Richard and Caryl Reiff, made the undisputedly wise choice to actually make a living; so they both went into engineering; enrolling at UNM.  The summer of '61 found them working for tuition money, chasing 2 pretty ladies in Roswell NM and impressing them with their formidable guitar skills. A neighbor of the girls got wind of their abilities, and with a connection at a pro studio in Roswell, produced a 45 rpm record of two bright and cheerful originals by "Richard and Caryl" (misspelled on the label). 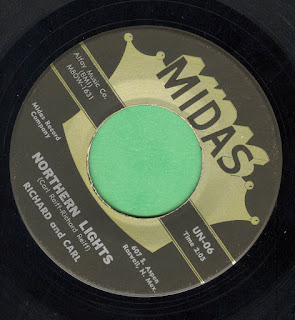 Without a clue of how to promote or how much it would cost - the well-intentioned 'producer' failed on his end and that was pretty much that. KDEF Albuquerque spun the (Chet Atkins-influenced but still quite original) platter in 1962, and it was used in a commercial for "Doctor Caldwell's Laxative" :)  [although, as happens in music, I'm sure it was more disseminated and appreciated than is apparent, I recently found a blog entry about the disc from a listener/collector in Texas.]
Although becoming Electrical and Civil Engineers respectively, Richard and Caryl never lost their love for music or the desire to make it. In the 70's and 80's Richard assisted the Dean Emeritus of UNM J.D. Robb with programming and recording his compositions and arrangements for synthesizers, as well as a few of his own - on the gear of the day including a 3-bay Moog, an Arp, an EMSA portable and an EMSA sequencer. (for which he was able to double the original 512 event capability!). A few years before Caryl passed away they made one last recording together of Caryl's composition "Chawin Tobacci".
Uncle Richard still plays, records and has been hooking me up with his recent endeavors. He's also in the midst of restoring a 1932 Wicks pipe organ. I can't wait to hear that! In the meanwhile - enjoy "Northern Lights" - Uncle Richard was kind enough to allow a download as well... and in a month or so the web crawlers and bots will find it, and spread it abroad to all the listeners it certainly deserves. - KM
Richard and Caryl - Northern Lights download mp3
(copyright 1961 Richard and Caryl Reiff - all rights reserved)
Posted by KM at 10:06 AM