What's In a Name 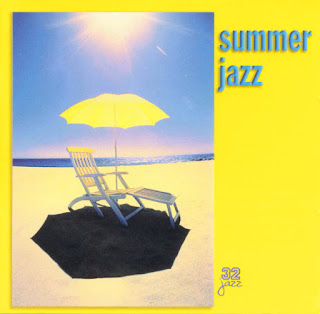 I used to either be cynical or get a smug kick out of marketing ploys used to sell jazz cds - until I tried selling them myself. Not so easy when yours is literally one of a thousand current albums vying for the affections of the 3% of music consumers who buy jazz! Since a record label's main goal is to sell records and turn investment into profit, it's no longer sad and pathetic to me for them to use sappy or cliche word groups that conjure up nostalgia or emotional 'happy places' such as "Rainy Day Jazz" or "Jazz for the Open Road".

Who doesn't love the romantic notion of being housebound in a violent storm with a warm beverage, good book, candles lit and some mellow or sultry jazz on the hi-fi? If I had half a brain for marketing I would have ripped off the cover below and called my latest cd "Summer Storm Jazz" or "Jazz to Snuggle Up By". (Don't be surprised if I actually try this in the future...) 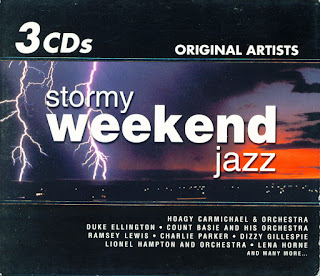 It doesn't seem to matter much what the cd actually contains. For instance - there's only one tune in "Stormy Weekend Jazz" that alludes to it's theme (It's A Rainy Day - Lena Horne). 2 of the 3 discs have their own titles - "Music for Body and Soul" & "Jazz Greats". That is the wonderful thing about jazz - it already evokes it's own mood by name; and you can couple it with nearly any time, season or function and it will 'work' for someone who just happens to be in the jazz mood.

I saw these and other box sets being sold at Staples, and I thought - "Suckers". The price was barely resistible, but I passed on principle. Just a month later I received it anyway, as a present from a very well-meaning relative. Part of me was glad, and I listened to it on, you guessed it, a stormy weekend - hardly a rare occurrence on Long Island. I haven't listened since; but I never forgot that I had it, what the cover looked like, what it was called or the personal mood it evinced from me. Somebody at the Madacy Entertainment Group got a big ol' bonus that Christmas, I'm sure.