Long Island summers and the need for jazz... 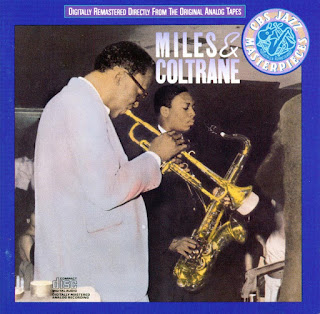 I have a habit of remembering mostly the good things from times gone by.  The '90s were sort of a black hole in my life. I lived alone in what would pass more for a shack than a house in Selden, NY. In the summer - wow! would that house get hot. On the worst days I'd head for the beach.

I remember one killer day in July I stopped first at "Record World" and picked up a cassette.  There was almost no jazz in my collection then, but that day I got the bug. The selection in particular was mostly for it's length (the vinyl version is 2 lps), since I could only afford one purchase. A budget release with more bang for the buck was "The Best of Miles Davis" from CBS Special Products; I owned it only for a short time, but it left a permanent mark on me. 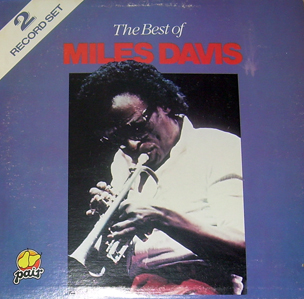 What a way to get acquainted: Corcovado, Joshua, Summertime, Seven Steps to Heaven, Basin Street Blues, The Duke, Miles Ahead, The Maids of Cadiz, Someday My Prince Will Come, My Ship, I Thought About You, Will O' The Wisp, My Funny Valentine, Two Bass Hit, 'Round Midnight, Stella by Starlight although I'm not sure the cassette had every track. I remember being impressed by the overall breadth and scope. "Seven Steps to Heaven" was a delight to my sensibilities, I was not expecting the enchanting dirge that is "Basin Street Blues", the harmonies to "Summertime" scintillated, and the delightful creep factor of "Will o' the Wisp" made it an instant favorite. This was also my first introduction to John Coltrane. Outside of a once-through of "My Favorite Things" at a noisy dinner party, I hadn't really heard him before - but I knew what I was experiencing had to be him.
With blaring sun and no breeze, the beach wasn't a relief that day; my drink was hot within no time, so I soon wanted to leave; but I stayed 'til the album was over. Apart from the music, there was nothing real special about the day, but I'll never forget it. 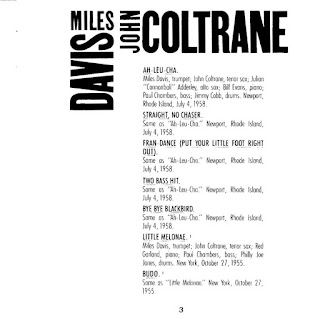 A few summers later, "Record World" became "The Wall". Another facet of the shack in Selden was it's proximity to the Selden Firehouse (slash extravagant ballroom), which meant on patriotic holidays access to and from my house was blocked off due to parades. It became a habit then to run to The Wall and get a new cd an hour or two before the road closures. On one such holiday I grabbed my first digital Miles - the sizzlin' "Miles and Coltrane".

Nothing that bothers the critics about this album, in particular his biographer Jack Chambers, bothers me nearly as much. The frenetic tempos which Chambers seems to think are some sort of nervous mistake on the part of Miles, are indeed half the appeal to me. There's a certain urgency and wildness that is only sealed by Coltrane - who's in the midst of his 'sheets of sound' thing, and new drummer Jimmy Cobb who is the very picture of "on fire". Cannonball is at my favorite point in his career, favorably influenced by Trane. Mile's skills as both a bandleader and music visionary come across loud and clear throughout the concert. It is true - aside from his solo, you cannot hear Paul Chambers' bass. This used to bother me just a little, but the absence of that grounding only makes the faster numbers seem wilder and more 'out there'. In between the uptempo selections are "Bye Bye Blackbird" and "Fran Dance"  - ballads which epitomize cool and showcase Davis' (and Bill Evans') lyricism and panache.

Following the live set are 2 tracks from the very first recording session of the 'classic quintet' in 1955. Miles' version of  the Jackie McLean composition "Little Melonae" is an exercise in slow-burning restraint, hitting a mood that would not be touched upon again until "Kind of Blue". Of particular interest is Red Garland's weird, macabre and swinging single-handed solo in the lower register of the piano. Overall this track encapsulates and is a harbinger of the marvelous things to come from this group. Lightening the mood for the closer is an uplifting version of "Budo" - everyone sounds happy to be there and happier to be playing. 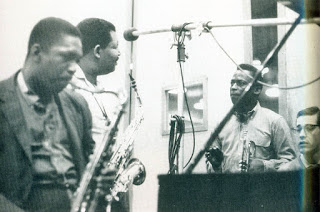 Columbia has since re-released this album as "Newport 58" adding the verbal introduction and the closing theme to the concert, and omitting the 2 studio tracks. Although re-mastered, reviewers still complain about the absence of bass. I'd recommend instead a used copy of "Miles and Coltrane" - "Melonae" and "Budo" - are essential. And really - who needs another 2 minute version of "The Theme" anyway?

Perhaps by association,  these albums sound and feel like summer to me. (In fact, the Newport concert was recorded on July 4th!) I think, however, that as the more austere music from Mile's later periods remind me more of winter; that where he was 'at' from 1949 to 1961 - all the wonderful moods and style preferences that are a running thread through each session - just align themselves in character to the many thrilling and memorable moods of summer. He'd no doubt scoff at such a summary, but what the heck, I'm a part time romantic. - KM