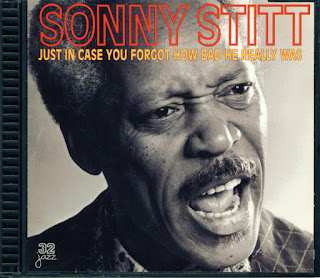 Now that's an album cover. Back when this first came out - a friend of mine wanted to buy it simply for the humorous photo/title. I didn't want to spoil his fun by telling him I already had it. At the time I was a budding Sonny Stitt fan, teaching myself saxophone by transcribing and playing his solos.

In fact, back then in the late '90s, these releases from 32 Jazz only had some appeal to me. The peculiar packaging, with the chunky black plastic and the paper artwork glued on gave off an air of cheapness. They were, in fact, quite affordable compared to many other jazz releases. Most of the catalog were 70's recordings from people like Stitt, and others who the average Joe wouldn't know much about. (Perhaps one of the biggest boons to posterity were the many Rahsaan Roland Kirk releases they brought back to light.)

Finally, around that time, one had the false impression he/she had all the time in the world to pick these curiosities up and experiment with the non A-listers they seemed to specialize in. 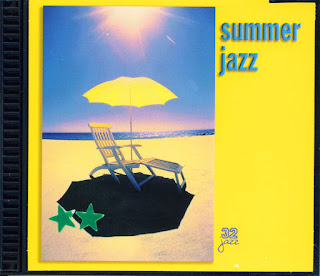 Fairly recently, my mom said in passing she'd like to learn more about jazz. So this past Mother's Day I found myself being thankful for compilations like the one above, which have instant visual/emotional appeal. With that in mind, I just typed "Summer Jazz" into the search box at Amazon and voila. I liked the idea of so many different sax players - since everybody loves saxophone. Poor Mom (who said she enjoyed it - while doing other things...) got a used copy of the long out-of-print cd.

Since I now cannot get enough of either 70's jazz or weirdo media packaging like that of 32 Jazz, I ordered myself a very cheap used copy as well. Aside from the beach chairs, umbrellas and yellow throughout the artwork, the only thing outwardly summer-y is the first track, "Summertime" - done quite distinctly and baroque by the Modern Jazz Quartet. It's summer alright - but a different kind of sizzle - like a dog day in August when it's too hot and humid to do anything. The fine impressionism and ambient mood setting remind me very much of Vivaldi's 2nd movement for the "Spring" concerto, just add 30 degrees. 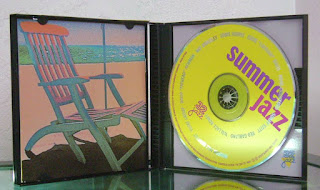 I was taken quite aback by the rest of the cd and did not expect to be so blown away. I can't stop listening to it. Compiled by label owner Joel Dorn and his son Adam, it is a joyous jazz feast for the ears. Standout tracks include an exuberant, elated and delightfully uptempo "Skylark" by David "Fathead" Newman, (I had caught him live around 2002 at Village Vanguard and dismissed him - this track sets things straight!); Eddie Harris is going for it (and getting it!) on "It Was a Very Good Year", the intensity and energy are very satisfying ; Hank Crawford soars and seduces with "Stardust", complete with luscious strings behind him; and for "Stay With Me" the flute of Yusef Lateef is romantic and lazy like a vacation, in nice contrast to all the horns. Not one performance disappoints - the platter (can I call it that?) is rounded out by Wallace Roney, Red Garland, Sonny Stitt, Eddie "Lockjaw" Davis and Nat Adderley. If you like jazz (and summer, or yellow) you shouldn't pass it up - I've put some convenient buy links at the bottom of this post. 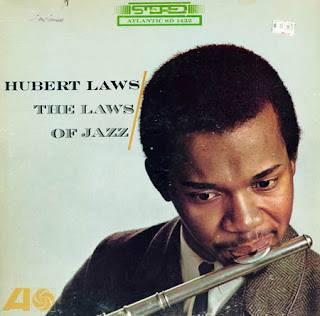 Joel Dorn was a positive force in jazz music and, from interviews I've read - an intuitive and loveable character. (Part of the charm of 32 Jazz cds are his forwards, printed on the inside of the case, behind the insert. Usually a story of remembrance, he caps each one off with "I'll talk to you later. Keep a Light In The Window".)

He began as a radio dj in Philadelphia, pestering and finally convincing Nesuhi Ertegun at Atlantic Records to let him produce. His first album as producer was a peach - Hubert Laws' debut "Laws of Jazz" (fine, catchy material and performances with a young man named "Armando" Corea playing piano). As Dorn's wiki page will tell you, by 1967 he was Ertegun's right hand man; signing and producing artists like Bette Midler and Roberta Flack - who won him 2 grammys - "Killing Me Softly" and "The First Time Ever". Fast forward to 1995 (you really oughta read the wiki page) and he's forming 32 Records, and later M Records and Hyena Records. 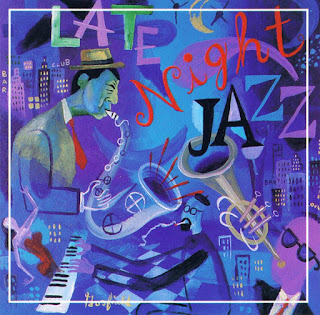 He reshaped jazz marketing permanently with his "Jazz For A Rainy Afternoon" series, a best-seller in the history of jazz, and spawning many take-offs from other labels like the successful one above. He died in 2007 at 65 having led a very full and fruitful life - putting forgotten recordings, artists and songs back on the shelves; inspiring others to do the same; and with the "Rainy Day" compilations, making jazz both palatable and desirable to a much larger and younger market - to which I say, Thank you Joel! - KM